edmond redd is a music composer for trailer, film, TV and TV commercials. At an early age, he began studying piano and music at a privately-held conservatory in Beirut. After graduation, edmond branched out by playing with several local groups before finding a good fit as a keyboard player with the melodic metal band The Arcane*. Over the course of the next decade, The Arcane* would release two albums, play numerous concerts, and open for higher-profile acts like Finnish metal band Apocaliptyca and Italian gothic metal group Macbeth.
In 2010, and after he moved to Dubai, edmond went to work on a full length debut album, writing, composing, recording and mixing from his own home studio. Published online in 2012, the result was Nightmare Delirium, a series of eclectic, haunting and inspiring compositions.
In 2013, edmond overcame a new challenge by scoring two short films one of which screened at the Dubai International Film Festival, Cannes Film Festival and 6 other international film festivals worldwide. He also has plunged into advertising by writing music for television commercials.
In 2015, edmond began writing epic trailer music, combining the descriptive music of film scores, the soaring grandeur of the classics and the modern rock influences. With a mixture of classical education and ongoing autodidactic studies and experiments, edmond always aims to capture the essence of emotions in his cues.
In 2019, edmond moved to Montreal, Canada where he currently resides. He is a registered SOCAN member. 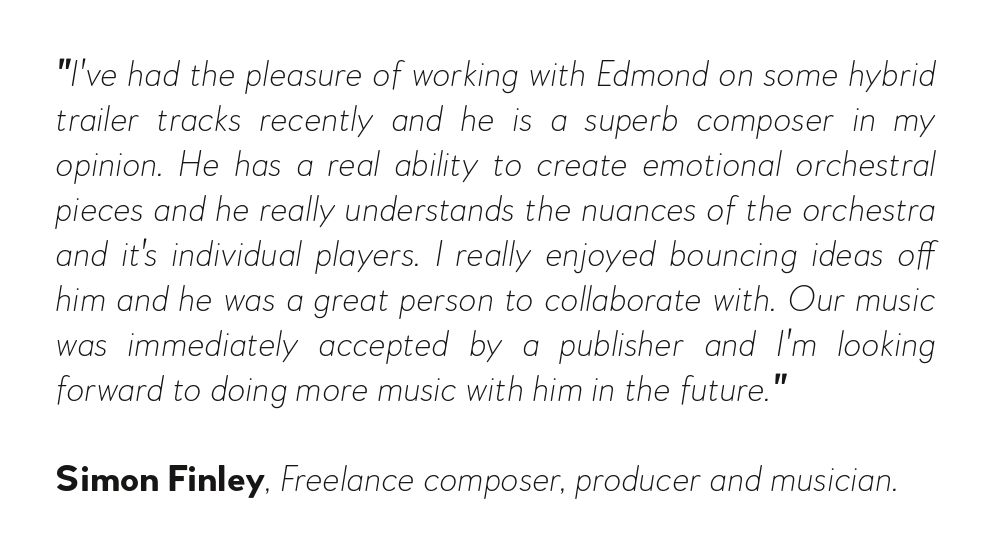